You are here: Home / Our Story

Founded in 1983, Freshwater Farms of Ohio is family owned and operated by three generations of the Smith family and their experienced staff. Dr. Dave Smith and his father, Dick Smith, an electrical engineer, started the facility at Freshwater Farms and the ongoing process of innovation and hands-on development. Ben Smith, Dr. Dave’s son, brings a lifetime of experience as farm manager and designer for WaterSmith fountains. 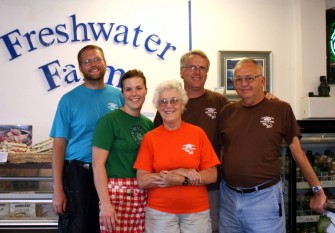 Dr. Dave was also the first president of the Ohio Aquaculture Association, whose original mission was to promote the exchange of ideas and aquaculture technology and help develop interest in aquaculture in Ohio. As a result, one of our goals at Freshwater Farms of Ohio is to educate the public and counteract the negative portrayal of fish farming in the media.