Hi, this is Ben with Freshwater Farms of Ohio and WaterSmith Systems.

One common question I get from our customers in colder climates is about winter care for their WaterSmith pond fountain, and other types of surface fountains and aerators. The two basic options are to remove the fountain from the pond, or to run it continuously all winter long. 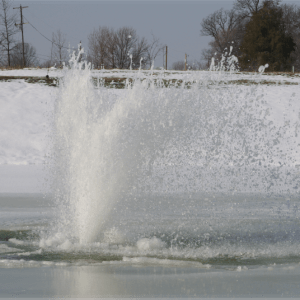 If your fountain stops operating for an extended period of time, for example during a power outage, the water inside the top of the fountain nozzle may freeze and prevent water from coming out. At this point, you will probably have to wait for some warmer, sunny days to thaw the ice enouh for the water to start coming through, which should melt the rest of the ice blockage fairly quickly.

The benefits of keeping your fountain going through the winter is keeping an opening in the ice, allowing for oxygenation of the pond to protect your fish, and providing an area of open water for waterfowl to remain and stay protected from predators.

On behalf of WaterSmith and Freshwater Farms of Ohio, we encourage you to look for more of our postings on information and tips about your pond, and wish you a blessed and safe winter. See you next time!

Nothing. But in Ohio, and most states throughout the country we are talking about the sterile version of this amazing and useful fish. A native of the Amur River in the extreme climates of Siberia, the grass carp was so named here because it is a rare example of a truly herbivorous fish that can survive on plant matter alone, like cows and other ruminant livestock. A fish that feeds like an aquatic cow is quite unique among fishes anywhere.

The White Amur has been a mainstay of Asian aquaculture for centuries, and is able to be raised on post-harvest rice straw in flooded fields. It’s role as a dietary source of protein is measured in hundreds of millions of pounds in overseas lands.

It’s role in this country is quite different, and popular stories trace the beginnings back to the likes of Bing Crosby, and his love of the game of golf in the southern U.S.. This is where White Amur were imported to control algae growth in ponds along the fairways. They were called into this role for aquatic vegetation control around the country and were probably shipped to all the states for that use. In addition, catfish farms were becoming established down south and amur found a place there for their abilities.

About the same time, biologists were starting to understand the importance of wetlands (formerly known as swamps) in our eco-systems, and the need to protect these under-valued areas. They also began to suspect that maybe two hundred years of importing and releasing non-native fish species into the wild was probably not a good idea…but there was a new technological out for the White Amur. 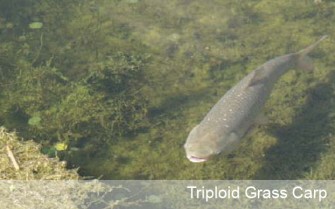 It was discovered that sterile triploid White Amur could be produced by a brief pressure treatment on their fertilized eggs. Putting the eggs into a strong canister with a simple hydraulic bottle-jack setup like car mechanics use to seat bearings, the hyperbaric condition caused many of the first cell-divisions to retain an extra set of chromosomes. This is triploidy when 3 sets of DNA are in every cell instead of the normal diploidy when only 2 sets are there. This triploidy renders the fish sterile, and after the fish reach six inches or so in size, a blood sample is taken and put in a medical analyzer (a Coulter Counter) that can detect the slightly larger red blood cells of a triploid fish.

Problem solved!…and now the fish biologists and state wildlife agencies had a new management option for aquatic vegetation control in lakes and ponds without the worries of non-native reproducing fish populations or the continued use of toxic herbicides that was so prevalent.

The southern roots of White Amur continued to grow as isolated ponds and fish farms started to produce sterile triploids from their natural diploid brood stock. Other states could now employ restrictions that would only allow the importation of sterile triploid fish from these southern growers.

The Ohio Division of Wildlife (ODW) took the bait in 1987 to allow the importation of sterile triploids amur into Ohio. The US Fish and Wildlife Service also got involved to certify each interstate shipment of triploids before the trucks left the south. This arrangement has continued to the present day, and demand has remained strong. 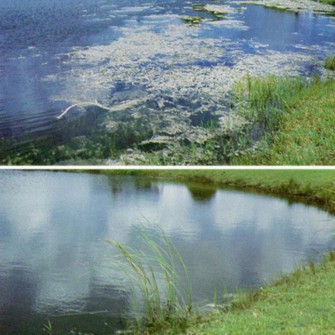 Thousands of pond stockings and decades later, field experience has shown that higher average stocking rates were necessary, and in the cases of older ponds that are more fertilized and nutrient-rich, a doubling of the rate to 20-30 amur per acre is needed. Golf course ponds that are well-fertilized from turf applications and are purely decorative are routinely stocked at 30-50 or more amur per acre. This seems to be a practical limit and a few experimental ponds used for irrigation purposes have been stocked up to 100 amur per acre, where the results were rapid, but the population of amur could not be sustained.

So where are we today with our understanding of the use of White Amur?

We know that the amur have definite preferences for various aquatic plants. They have their favorites: duckweed, water cress and water celery, and they have their less favorite “vegetables”: water lilies, Chara and filamentous algae. Unfortunately, watermeal is not controllable by White Amur.

We also know that by increasing stocking rates, amur will eat their “vegetables” after their normal favorites are gone, and that may require a doubling of the original rate.

We know that nutrient levels in the pond or lake affect the growth rate of aquatic vegetation and hence the number of amur required to keep up with that pace. On the flip side of heavy vegetation, the plants can remove a large percentage of the pond nutrients (nitrogen and phosphorus, for example) and water clarity around the plants is high, but the lack of planktonic organisms means the basis for the aquatic food chain is “locked up” in plants and not very available to fish fry and food organisms. The consumption of aquatic plants by amur releases these nutrients to the phytoplankton and increases the natural productivity of the pond, including catchable fish, but water clarity will be less.

We know probably the biggest benefit of amur as a biological control versus the use of chemical herbicides is the spawning and reproduction of other desired fish species in the pond. While larger fish can tolerate copper-based compounds for example, it is well known that they are devastating to small fry and their microscopic food base.

We know that managing a fishing pond with a small amount of vegetation (5-15% of the pond area) may be ideal, but it is very hard to strike a sustainable equilibrium with amur in the real world. The fish do continue to grow and eat throughout their normal 15-year life span, and this changing dynamic is in addition to seasonal and year-to-year differences in rainfall, number of sunny days, and temperatures that influence how the vegetation will grow. Additional re-stocking of 1/3 of the amur population every 5 years is a good long-term strategy in practice to continue a proper level of control.

We have developed a strategy of habitat enhancements with brush pile construction that can stabilize the amount of vegetation and cover for young fish species, feeder species and their food sources. This enables a pond to be more sustainable and to naturally support the recreational value of the pond. We have also found through trial and error that a single large brush pile constructed of about 30 “Christmas Trees” or evergreens per acre of pond surface to be adequate for these purposes. These brush piles function best in depths of 3-5 feet and adjacent to shoreline spawning habitat with water lilies, wooden pallets or other vegetation in place.

Real world experience has shown the continued control of aquatic vegetation by White Amur is a safer, easier and more economical approach over the long term than any other physical or chemical control strategy for ecologically enhanced and self-sustaining ponds and lakes.

Seventeen years ago we got 5″ white sturgeon fingerlings from Oregon, and they are now 4-5 feet long. Looks like the guys below may have met their great-great-great-grandmother. Bottom line…they never stop growing and can easily live over one hundred years! Our sturgeon are a children’s favorite at the farm, and have been part of our petting zoo for many years. I guess if we wait long enough, we may have to offer rides!

This Sturgeon was caught on the Willamette River just below Oregon City two weeks ago. It weighed out at over 1,000 lbs and measured out at 11’1″. It was 56″ around the girth and took over 6 and a half hours, and 4 dozen beers, for the 4 guys taking turns at the reeling it in. Any Sturgeon OVER six feet has to be released unharmed and cannot be removed from the water. They are brood / breeding stock and probably older than most of us.

Now that spring is just around the corner, we have been getting many calls for pond stocking fish…and…reality check…spring is not here yet in Ohio!

Here are some things to do for your pond in the meantime. Walk around your pond and look for any fish mortalities that may appear and dispose of them in your compost pile. Sad to say, I suspect many pond owners will have unpleasant surprises resulting from the abundant snow cover and cold weather of this year. Anytime that deep snow blankets a pond for more than a week, you can bet there will be “winter-kill” cases where the pond has been smothered by light-blocking snow cover, and dissolved oxygen in the water has dropped too low to support fish.

When you check out your pond, you may also notice that algae and aquatic plants are greening and gearing up for the year. This is why we often stock the sterile white amur (grass carp) in February, since they can do a better job of vegetation control if given a headstart. Once the amount of daylight becomes longer in February, plants start to grow again, regardless of the air temperature outside. 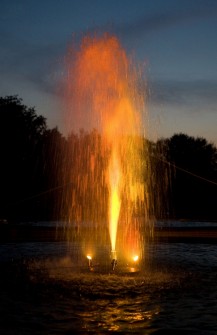 Dramatic, yet functional aeration for ponds.  When you combine energy efficient axial flow pumps and draw-tube technology to circulate and destratify a pond, it becomes possible to have both.  With a 1 hp unit as pictured above, energy costs are about $1.79 per day for continuous operation.  Visit  www.fwfarms.com for more info.