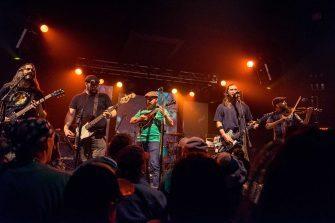 Pittsburgh-based Bastard Bearded Irishmen is one of the most entertaining and energetic live shows today.  Their sound is an original, ferocious blend of traditional and contemporary Celtic music, mixed with punk, gypsy and high-energy rock n’ roll.

Bastard Bearded Irishmen, or BBI, was originally intended to be a one-night-only tribute for a dear, departed friend. Jimmy Bastard and Ben Jaber shared a passion for Irish music and enlisted Dan Stocker on drums and Danny Rectenwald on mandolin to form the nucleus of the band.

What began as a tribute in local pubs, turned into three records, constant touring, and sharing the stage with everyone from The Rumjacks to Gogol Bordello. They have one of the best St. Patrick’s Day shows in the country.  They’re hard-partying and always in good spirit. The group’s lineup is rounded out by Paul Dvorchak on fiddle, Ryan Warmbrodt on rhythm guitar, and Sean-Paul Williams on bass.

Bastard Bearded Irishmen concerts are a non-stop barrage of party anthems, dancing tunes and maybe even the occasional whiskey-fueled ballad.  The experience is always organic, and sometimes, unpredictable.  Jimmy climbs the rafters and Danny jumps into the crowd.  Maybe you get to do a solo. Who knows?  Quite simply, the guys want you to have as much fun as they’re having.

The band’s third album, “Drinkin’ to the Dead,” will be released wide May 2018.  It’s a tribute to fallen friends and family, one of the reasons Bastard Bearded Irishmen formed in the first place; a respectful remembrance of those who have passed with an acceptance to go on and live your best life. Standout tracks include “Green Side of the Hill”, “Drunken Drinkin’”, the cover of “Dirty Old Town” by Ewan MacColl and the epic ending and album-titled “Drinkin’ to the Dead.”

“Drinkin’ to the Dead” is full of surprises and new stretches for the band. The album further demonstrates that Bastard Bearded Irishmen is not just a St. Patrick’s Day band.

One other special note:  this is first album where mandolinist and background vocalist Danny Rectenwald steps out to lead vocals on four tracks. Jimmy Bastard still leads vocals and is the principal songwriter on the remaining songs.