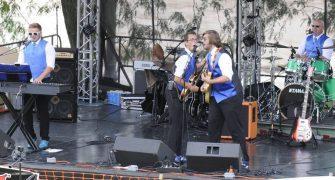 The Blue Leaf’s from Tipp City, Ohio are a mashup of classic rock vibes and original Americana attitude. The band emerged from the ashes of a seven-piece oldies cover band to forge a group of dynamic performers creating original songs. Their decidedly unique style has presented opportunity as well as challenge. “It’s tough, especially for a band from the Midwest. Most people already know what they like,” says singer/keyboardist Coleman Clark, noting that The Blue Leaf’s don’t sound like many popular artists today. “But what people probably don’t know is that we’ve taken elements from the current musical climate and the past and really forged our own sound and feel.”

The band is poised to release their sophomore album The Shades of The Blue Leaf’s, on which they show growth and the evolution of their sound compared to their first release I Just Met Her. With fresh songs, they continue to find their style and create unique tunes to please festival audiences. “Every live show performance is exhilarating, thanks to the enthusiastic crowd,” says Clark. “With each show I’m reminded that the practice is worth it.” The band also cites the artistic comradery as a strength. “Having people to share a spotlight with is my favorite thing about being in the band. That moment when we’re going into an instrumental solo and I look over at my bandmates to give a smile. I can see we’re all having fun and proud of each other in that moment, that’s a high nothing else can match,” explains guitarist Adam Clark. “I don’t think I’d do this if I were alone.” Drummer Bill Heck adds, “The feeling I get when I’m onstage with my bandmates. It’s the greatest thing ever!”

With three of four members in college and no professional support, the band must find their own path toward success. Striking a balance between the music, reaching out to bigger markets in Ohio, and time management, the band is optimistic. “We’re always working on new songs and getting festival gigs in the greater Dayton area,” says bassist Chase Heck. “We’ve decided not to do another full-length album in 2018, but we’ve talked about an EP,” adds Clark. “With college’s arrival we’ve had new life experiences and listened to new music, so we’ll try to keep growing as songwriters and performers.”