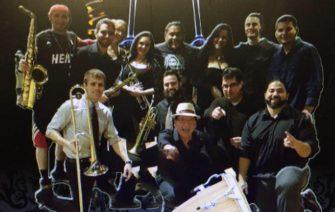 Al Son Del Iya is a local salsa band from Columbus, OH founded in 2007 by Peruvian percussionist Waltinho Casanova, a hard hitting conguero and die-hard salsa fan. With culturally diverse musicians, Al Son Del Iya plays year round in local businesses, private events, and festivals. You may recognize the band from their recent performance at the 2017 Dayton Hispanic Heritage Festival.
The band’s name, Al Son Del Iya, goes back to the root of Salsa. Al Son Del Iya translates to the beat of the Iya, an African drum brought to the Americas by the Yoruba people of Southwestern Nigeria primarily used for entertainment and religious rituals. Salsa is a direct descendant of those rhythms, born in Cuba then enriched by Latino immigrants in New York during the 60-70’s. Today, Salsa unites us all with it’s upbeat and contagious groove.
Al Son Del Iya aims to provide an authentic Latin American “Salsa Gorda” or “Fat Salsa” music experience, just like the sounds you would hear around any coastal town from Peru to Panama, along with Cumbia and Merengue.