Locking Up Otis Perform at the Ohio Fish & Shrimp Festival 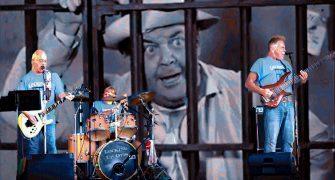 Locking Up Otis is a three piece ensemble playing music from the ‘60s to the ‘80s.

Gary Jackson- Lead Guitarist hails from Toledo Oh and has been playing guitar since he was 12.  He played with the Qui Band in  Toledo as well as opened shows for Alice Cooper, Mitch Ryder & the Detroit Wheels, The Joe Perry Project, The Turtles, Dr Hook & the Medicine Show, and Jonny Lang.  Gary has also played with some of Daytons greats, Atlantic Crossing, Illuzion, B-Sharp, Late Night Exchange, the Difference,  Night Reign, the Johnsons, and Soul Express.

Jeff Lofino –  Drummer did his first gig at age 12 and has been playing continuously ever since.  He has opened shows for Foghat, Jackyl, Iron Butterfly, David Allen Coe and Johnny Paycheck. He has also played with some of Daytons finest bands such as Diver, Frequency, Broken Wing, 2nd Wind, DLM as well as Soul Express.  Jeff’s musical love is deeply in the 80’s and 90’s heavy metal era but his versatility and smooth style impresses in all genres.

Dan was born in Dayton Ohio and attended Meadowdale High School and Wright State University receiving a bachelor of Music Degree as a tuba major in 1981. He began playing Bass Guitar when he was 13 years old. Early influences  on bass were rocker’s John Entwistle,Chris Squire ,Geddy Lee, and John Paul Jones, as well as Jazz Player’s  Stanley Clarke and  Jaco Pastorius. During Dan’s college years he played in a full 17 piece big band  Eric Zadan’s “Dynasty”which along with Eric’s impeccable piano playing included many incredible horn players from the Cincinnati Conservatory of Music. Other classic rock bands over the years   included Atlantic Crossing,   Illuzion, and  The Johnsons all groups  that included Gary Jackson on guitar and vocals. He  also has played in praise groups and choir at church. Dan has opened for The Edgar Winter Group, The Joe Perry Project and the British all female metal band  Girl School.