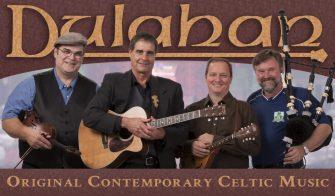 Dulahan’s music is a Celtic hybrid that pays homage to the traditional but incorporates all the varied musical influences of the four members into its unique sound. The result is a unique blend of creative songwriting and musical energy that draws on both contemporary and the traditional Celtic but also unmistakenly contains subtle hints of a Roots/Americana feel as well.

The interplay of the multiple layers of acoustic instrumentation, combined with the powerful 3- and 4-part vocal harmonies within the bands’ original compositions generates a sound that connects with fans of the traditional and the contemporary and draws new fans wherever their music is heard. The band was formed in 2001 and features the following musicians; Kyle Aughe – Vocals, Guitar, Bouzouki, Banjo & Harmonica; Leo Butler – Vocals, Irish Whistles, Flutes & Highland Pipes; Mark Sandlin – Vocals, Mandolin, Bouzouki, Banjo & Guitar; Greg Beasley – Vocals, Fiddle & Guitar.